Jorge Posada announces his retirement at a press conference at Yankee Stadium today. See Bronx Baseball Daily (link at right) for a review of Posada’s career.

Cody Ross signed with Boston. He most likely will platoon in RF. Boston still has holes to fill.

Kevin Millwood signed a minor league deal with the Mariners. Omar Vizquel signed with Toronto. Vizquel, the active leader in games, PA and AB, will be 45 in April. He has 2841 hits.

Besides Ibanez, Damon, Vlad, Matsui… forgot another DH still out there: Derrek Lee. One off the board: Wilson Betemit, who signed with Baltimore.

Ex-Phils broadcaster Andy Musser died at the age of 74.

AAA: SWB 9-3 losers. Terry Tiffee 3 h, double, HR, 2 RBI. Jordan Parraz solo HR. Forget the starter, for once again, Andrew Brackman stunk in relief, 2 IP, 2 R and his ERA goes to 7.94. I’m so down on the former first round pick it’s unreal. I do not know how long the Yanks stick with him but I hope it isn’t long. Cross him off the Killer B list. For him, the B stands for BUST.

The winner for the other team? Kevin Millwood.

The Subway Series (part 1 for 2011) starts tonight. I’m not a big fan of interleague play, especially when it’s in the NL park (which tonight’s is not; the Yanks go to CitiField July 1-3). I guess when you lose your ace and it helps to cost you a postseason (Wang, 2008) and possibly him his career, you feel that way. To me, it’s ridiculous to play one way for 153 games and another way for 9. The problem with getting rid of the DH is that it’s used in the minors. Many NL pitchers don’t hit, or hit much, in the minors. Lehigh Valley (which plays some five miles from my home) is the AAA affiliate of the Phillies, a National League team. They use the DH if they are playing an AL affiliate, and the pitcher must hit only if it’s two NL affiliates playing each other. So even if LV plays SWB at home, the DH is used. So what do the pitchers do when they reach the NL? After all, they don’t hit that often even in the minors. It’s a ridiculous situation. It would just be so much easier if the NL adopted the DH. Frankly, I find NL games boring to watch because of the lack of a DH. I am very old-school in baseball (hate domes, astroturf, divisional setup, wildcards) but like the DH. Most pitchers have swings worse than the one grandma has when she beats her rugs. Watching an NL game where you have an 8-9-1 inning coming up? Boring.

But this weekend’s series is at Yankee Stadium vs. an injured Mets team. They’ve played better lately but the Mets started 5-13 and will be missing Wright and Davis. I’ll be disappointed if the Yanks don’t take two of three. Granted, R.A. Dickey’s knuckleball might mess with the Yanks’ bats, but just make sure that Reyes and Beltran don’t beat you. As for Reyes, he’s a free agent at the end of the year, and you wonder where he’ll be come August. The financially strapped Mets will surely deal him. Would Boston deal Lowrie as part of a package? Reyes would look good in SF, sparking the lineup and playing D in back of that pitching staff.

Speaking of Boston, it’s now their turn to take a look at Kevin Millwood. They signed him to a deal last night.

Mariano Rivera could reach a milestone tonight (weather permitting, of course. This week has been lousy, unless you are a duck). His next appearance will be the 1000th of his career.

Today’s lineup. Cervelli gets his first game of the season.

Frankly, right now I’d probably prefer Chavez at DH to Jorge’s .125, although I see the need to get Posada going. But if he’s still on the interstate a month from now… in other words, how long do you wait?

Today is May 1st. After getting bombed this week for AAA (6 r, 2 IP) Millwood is not added to the Yankees’ roster and opts-out of his deal.

In the third, a walk to Gardner, sac bunt, HBP and single load the bases with one out for Teix. GIDP. Wasted chance. 2-1 Toronto after 3.

Nova goes 6 1/3. With a man on 1st and one out, Robertson replaces Nova. Robertson gets out two but gives up a walk. Two on, two out and it’s Logan. He gets a groundout. 5-2 Yanks after 7.

Strange. Chavez PH for Cano in the 8th. Nunez goes in to play 2nd.

More on Cano in a moment.

Cano: bruised hand. Day to day. Maybe Nunez gets a game. Not major.

It gets better by gametime.

Teix gets a day to rest his shoulder. After 21 games, Jeter gets a day. Nunez finally gets a start (trumpets blare…)

The Yanks get lucky in the first. An error by Nunez and a hit put 2nd and 3rd, no out but CC gets out of it without giving up a run.

In the third, the Yanks get two runs on no hits. Four walks and a SF. 2-0 after three.

Ok, now if you were going to predict the person and method as to who would get the first Yankees’ hit, would you have said a Gardner HR? But so it is. Um…. Gardner 3, Jeter 0, Swisher 0. Nunez follows with a double. Good for him.

Btw, first pick in the draft? Cam Newton to Carolina.

The Floodgates have opened. After five, 8-0 Yankees.

RBI groundout for Chavez in the sixth. 9-0.

Things get sloppy for CC in the 7th, he gives up three runs. I’d expect him to be pulled now. 9-3. All runs unearned due to Nunez’ second error of the game.

Double by Gardner, single by Nunez, SF by Granderson. 10-3.

…and all game long, Suzyn Waldman keeps saying that Swisher is the last of the regulars not to have a HR. Hey Suzyn, guess how many HR Jeter has? Answer: ZERO.

AAA: Kevin Millwood didn’t help himself, and maybe now Ivan Nova is safe. Millwood was bombed for 6 R in 2 IP as SWB lost 6-3. Millwood gave up 2 HR. Ramiro Pena had a 2-run HR. Cervelli 0 for 4. That groin must have been bothering Montero, even though he came back and played (DH). 0 for 5, 4 strikeouts. D.J. Mitchell 6 scoreless innings in relief of Millwood. 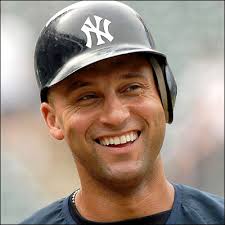 Last June 12th, Derek Jeter hit 2 HR in a game vs. the Astros. Since then, he’s basically become Bucky Dent.

Jeter has played in 115 games since that June 12th game. Here are his numbers since then.

Basically, Derek Jeter has become Bucky Dent. Which raises this question. You wouldn’t lead off Bucky Dent, would you?

Granted it’s one game, one shutout last night. This coming two nights after a 5 HR, 15 run game. But there are disturbing trends here.

If I were Girardi, this would be my lineup very soon. Note I will put x’s in the six slot. I’ll get to that.

Jeter hits 8th. Bucky Dent production deserves a Bucky Dent lineup slot. (It would be 9th but Gardner is at .136-1-4). Would this cause clubhouse repercussions and possible dissension? Most likely. Would it be better for the team? On the field, yes. Off the field, you wonder.

But ask yourself. Who right now would be more likely to lead off the game with a HR or a double? Jeter, or Granderson? Jeter has 19 hits this year, just two doubles. Probably a good 1/3 of his hits are infield hits. The Yanks have a much better shot at jumping out to an early lead with Granderson leading off (4 doubles, 1 triple, 7 HR) than Jeter. Not to mention that Granderson is 2 for 2 in SB, Jeter 0 for 1.

I put Swisher second because Swish, I think, would see better pitches in the 2 hole. Right now, batting sixth, Swish has a .145 hitter in Posada hitting behind him. Granted Jorge has 6 HR, but he is 9 for 62. If not for the HR, Posada would be getting the Gardner treatment. Swish has 0 HR in 19 games after hitting 29 in each of the last two seasons. To get Swish going, I put him second.

Oh yeah…about Jeter for a minute. He’s started every game. Shouldn’t he be rested more often about now? Shouldn’t he be playing 125 g. /season now instead of 155? He hasn’t had a day off yet. Granted he hates days off, but hey….lack of production means lack of PT.

Now for the XXXXX at the #6 slot. If Jorge Posada is still below .230 on June 1st, what do you do? Eric Chavez is hitting .421 in limited time. Jorge Vazquez is .333-8-23 in 18 games at AAA SWB. Vazquez does still have the BB/K ratio problem. 2 walks, 19 K. That is something to consider. He isn’t a fielding whiz, either. But DHing him, you do wonder. When Vazquez does make contact, the ball does fly. We saw that in spring training.

Not only that, Jesus Montero is hitting. He is at .407-1-4 in 14 games. I think they would rather leave Montero catch every day at AAA than bring him up to DH.

But if Posada continues to struggle, what then? He’s in the last year of his deal. He turns 40 in August. But if he’s hitting .170 on June 1st, do you actually go so far as to release a Yankee Icon in order to get Vazquez’ bat into the lineup (especially if Vazquez at that time has, say, 15 HR and a .300 BA)? How far do you go with an aging icon who can’t catch anymore and who is below the Mendoza line? One who is in the last year of his contract? Would the Yankees have the guts to release Jorge and drop Jeter to 8th at the same time if that is what is needed (and it’s starting to look that way)?

Then we get to Gardner, hitting .136. One problem in the struggles of Gardner and Posada is that Gardner is a lefty hitter and Posada a switch-hitter. Vazquez and Montero are righty bats. Andruw Jones isn’t an everyday player anymore. He’s a righty bat. Down at AAA the OF are Golson (.239-3-5, gun of an arm, righty bat), Justin Maxwell (.232-5-12, righty bat), Chris Dickerson (.258-0-5, lefty bat), Jordan Parraz (.333-2-8, righty bat). So it looks like Dickerson by default if Gardner is replaced. But you then lose Gardner’s speed and D in the OF. Golson has the speed and D, but isn’t hitting that much, and isn’t a lefty bat. So Gardner needs to pick it up.

Finally, a good tweet by Jon Heyman yesterday. He figures two more starts for Ivan Nova (1-2, 7.63) to prove himself. Otherwise, Millwood. Millwood is hitting just 84-89 in his starts, but has results. (2-0, 1.29 in 14 IP). He better hit his spots because otherwise… But if Nova continues to struggle, and Hughes is still down, could we soon see

It’s not seeming that far-fetched.

The Sommer Frieze
Create a free website or blog at WordPress.com.