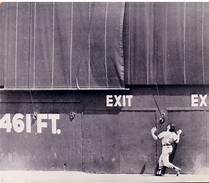 This photo was taken on August 12, 1964. Mel Stottlemyre made his MLB debut against the White Sox, winning the game, and Stephens is the centerfielder for the White Sox that day looking up at a HR hit by Mickey Mantle that went over the 461 ft. sign and ALSO the fence and screen which combined were about 23 ft. high. It was said to be a 502 ft. shot.

Stephens just passed away a few days ago on April 27, age 86. I thought you’d like to know the story and see the photo.

Who knows. If he was born 10 years earlier, and if his career wouldn’t have ended at the age of 32 due to a rotator cuff injury, maybe Mel Stottlemyre would be in the Hall of Fame.

He was that good.

But #30 as a player (and #34 as a coach, because fellow #30, Willie Randolph, was a coach at the same time as Mel), had the misfortune to join a Yankees team as the dynasty was ending.

As for Stottlemyre, he won that game and went 9-3, 2.06 down the stretch. The Yanks needed it, for they won the pennant by just one game. In one game at the end of that season, Mel not only pitched a two-hit shutout, but also went 5 for 5 as a hitter.

You thought an ace was on the way and coming off of their fifth straight pennant, that more pennants were forthcoming. You were half right.

In comparing pitchers like Catfish Hunter and Jim Palmer to Mel Stottlemyre, Dick Howser mentioned that Mel was better, but he didn’t have the support behind him. Palmer and Hunter, of course are in the HOF. Stottlemyre not.

At the age of 32 it was all over. Torn rotator cuff. Medical know-how wasn’t what it is today. Career over.

He became a pitching coach and helped the 1986 Mets to a WS title. He went to Houston for a couple of years.

And in 1996, came home. I will say, I was more excited in 1996 for Mel coming back home as pitching coach than I was with Joe Torre being hired as manager.

Mel won 4 WS rings as pitching coach for the Yanks from 1996-2005. He later went to Seattle to work with them.

In 1999, Mel was diagnosed with myeloma, a cancer of the bone marrow. It’s amazing that he lasted this long and it is a testament to the fighter he was.

It is too bad that Mel pitched in the dark ages of Yankees’ history in the late 1960s and early 1970s.

For had he pitched in the golden era, he’d be remembered as a pitcher as great as Ruffing, Hoyt, Ford, Gomez and Ruffing. And a pitcher he would develop .. Andy Pettite.

A-Rod drove in five runs, the Yanks hit five HR, and Nathan Eovaldi bounced back from a poor performance last time out as the Yanks trounced the Tigers 14-3. The win keeps the Yanks one game behind Tampa Bay for the top spot in the AL East. The Yanks are 38-30.

Before the game, it was Old-Timer’s Day, and as expected, the Yanks honored long-time second baseman and later coach Willie Randolph with a monument park plaque. Then came a surprise. For Randolph wasn’t the only ex-Yankee great who wore #30 to be honored. The Yanks also honored former pitcher and coach Mel Stottlemyre with a plaque as well. It was touching, and no one knew about it. Stottlemyre has been battling cancer.

As for the game, the Yanks made it a rout early. They got one in the first on a triple by Gardner and a fielder’s choice grounder (RBI) by A-Rod that wound up becoming an error.

In the second, Didi Gregorius homered for the second consecutive game (4) and A-Rod tacked on a SF to make it 3-0.

Nathan Eovaldi started on just three days rest to give everybody else an extra day of rest. The last time out, Eovaldi threw just 36 pitches, lasted just 2/3 of an inning and gave up 8 runs. This time, 6 IP, 2 R before yielding to rookie Bryan Mitchell, just called up from AAA. Mitchell went three innings and gave up 1 run in his first Yankees’ outing of this season. Nice bounceback effort by Eovaldi, and yes, Mitchell, because he went three innings, gets a save despite the lopsided score.

In the fourth, Beltran hit his second HR of the game and seventh of the season to make it 9-0. Beltran now has 380 HR for his career, one behind Teixeira. Chris Young had an RBI single later in the inning to make it 10-0.

The Yanks weren’t done. In the fifth, McCann had an RBI single, Beltran was HBP with the bases loaded, and Gregorius had an RBI groundout. 13-0.

Detroit got three in the top of the seventh before Chris Young closed out the scoring in the bottom of the 8th with his 8th HR of the season. 14-3.

The Yanks go for the sweep Sunday afternoon with Tanaka on the hill. Then the Phillies come in for three games.

The latest on the Classic Yankees profiles is now up on Bronx Baseball Daily. Mel Stottlemyre.  Click on the link to access it.

Besides this blog, I am also writing profiles of ex-Yankees for the Bronx Baseball Daily blog. Miller Huggins is the new profile up today.

With Mike Mussina throwing out the first ball tomorrow, a profile will be going up on Mussina tomorrow.

Upcoming profiles will be on Mel Stottlemyre, Spud Chandler and Snuffy Stirnweiss. There is a link to Bronx Baseball Daily on the right of this page. Feel free to go over there and check out the profiles.

…and a rookie shall lead them?

Ivan Nova had his 2nd major league start be as good as the first, and this time, instead of a ND, he wound up with his 1st MLB win.

The Red-Hot Marcus Thames Hr’d in the 2nd (9) to put the Yanks up 1-0. The Yanks added a run in the 3rd. Cervelli doubled and Gardner singled him in. That was all the offense the Yanks would muster.

Teixeira, listed in the previous post as playing, was a late scratch. Swish at 1st again, Kearns in RF.

The slumping Cervelli had his biggest game in a while. 4 for 4 to get his average up to .253. He also threw a man out stealing at a big moment in the game.

Tough day for Kearns, who left a few stranded.

Manny is apparently going to Chicago (but not in time for this series). It could be a straight waiver deal, which means all of his salary leaves the Dodgers and is dumped on the White Sox.

It looks like 2 rehab games for Berkman at Trenton, then he’ll rejoin the Yanks.

Were the Joba rules in vain? … and a NY doo-wop legend passes away.

I had the privilege of seeing Johnny Maestro in concert twice, and met him backstage once. I have a greatest-hits album signed by him. Brooklyn-born  Johnny Mastrangello had an angelic voice. Great showman, wonderful guy. Maestro died Wednesday night at the age of 70.

Maestro began his career with the Crests, whose biggest hit came in early 1959 with 16 candles (#2 for 2 weeks). Six Nights a Week, The Angels Listened In, Step by Step and Trouble in Paradise all hit the top 40 in 1959 and 1960. The Crests were one of the first interracial acts in music history.

A regional hit was My Juanita. Maestro left the Crests, and went solo for a time, hitting the top 40 in 1961 with Model Girl and What a Surprise. Later, he hooked up with members of the Del-Satins, who had once backed up Dion. After spending a little time with them, they eventually merged with a group called the (great name) Rhythm Method. This new combined group took on a new name—The Brooklyn Bridge.

The Bridge had one major hit, 1969’s The Worst That Could Happen, which hit #3 early that year. Other minor hits included Welcome Me Love; Blessed is the Rain; Your Husband, My Wife (controversial at the time); and a version of You’ll Never Walk Alone.

Now to baseball…Since Phil won the #5 spot, and Joba is bullpen bound (as the 8th inning setup guy, where some believe he should have stayed?) were the Joba Rules for naught? What about Hughes limits?

I don’t think the Joba rules were for naught at all. Nor am I concerned over limiting Hughes. You have to remember that neither has reached their 25th b/day yet, and the Yanks do want to be cautious about what can be called their two most prized young pitching prospects. After all, the Yanks have not developed a rotation mainstay since Andy Pettitte; much too long in my opinion. It’s one thing to drop a Joba back into the bullpen to dominate. We saw that with Hughes last year and hopefully Joba does that this year. It’s another to develop one as a starter. Much more difficult. Before relegating one to the bullpen, you have to see if he can be a starter first. You just have to, especially at that age. Having ten to fifteen year rotation mainstays, like a Pettitte, is a nice luxury, and protecting them so that they can BE those kind of long-time mainstays is a necessity.

Old-timers may scoff at the overprotection. They correctly point to pitchers of the past who continuously threw over 300 innings but forget some things. Yes, Warren Spahn gave 245 or more innings every year from 1947-1963. But they forget that that streak began when Spahn was 26. Spahn lost three years to WWII.

I guess the question is on investment. With so much more invested salary-wise in the players today, burning out a pitcher for short-term goals vs. trying to maximize investment over the long-term is a more important issue today. It’s why I think the Joba Rules or Hughes Limitations aren’t for naught.

You hope both realize their full potential—for as long as they can—in whatever role is suited best for them.

The 25 man roster for Opening Day…not much more than a week away, hasn’t been set, but we can pretty much figure it out now.

The only questions I have are that I hope Posada doesn’t drop off (38 years old). He’s fighting Father Time here. Will it be one or two lefties in the bullpen? Above is only one. Will a righty be dropped for Logan or Ring to be a second lefty in the ‘pen? If so, who is dropped? It appears as if there will be just the one lefty. Lastly, Thames hasn’t done anything in spring training so far. When will he pick it up? If he doesn’t pick it up, will the Yanks look at another righty bat off the bench (no, I don’t see them going after Jermaine Dye). Could they then see what David Winfree would give them? Make a deal with the Dodgers to get Jamie Hoffmann back? I’d expect them, if Thames fails, to take a less expensive route than Jermaine Dye. I think that they would want someone who would be more apt to accept a bench role than Dye, and also someone with more speed and better defense than Dye (36) would give.

The Sommer Frieze
Blog at WordPress.com.